The Answer to Guitar Riddle No. 1 by Shawn Persinger

And the Winner is…

So either last week’s “Guitar Riddle Contest” was either too difficult or readers/listeners simply didn’t have the time to send me their guesses. I am assuming a little of both as I had more, “I have no idea,” entries than legitimate guesses for either song or guitarist and I had fewer entries overall than Soundcloud plays: Guitar Riddle No. 1 MP3

Sadly, as a result there is no definitive winner. Two readers/listeners got the guitarist I as imitating, PinkFloyd’s David Gilmour, and two others correctly named the song, Mozart’s “Turkish Rondo”, also known as “Rondo alla Turca” and more specifically Sonata in A, K. 331, Third Movement Theme (see chart below) but not one person was able to name both song and guitarist. So perhaps I’ll try this game again in the future but make it a little easier…maybe.

The Riddle Arrangement (not Nelson)

A few notes on the guitar riddle’s arrangement and performance.

Last week I included a transcription of the riddle as played by yours truly, in the style of David Gilmour. The riddle arrangement featured Gilmour’s slightly chorused, lead Strat tone, with a touch of ambient delay. For the accompaniment I used a wash of chorused and phased chords. Both lead and rhythm attempt to mimic Gilmour's tone as heard in “Shine On You Crazy Diamond” from the record, "Wish You Were Here". The performance of the melody was featured in the key of Dm (the saddest of all keys), which is also the key Gilmour solos in during “Another Brick in the Wall (Part 2)”.

Stylistically speaking the two main elements I tried to imitate in Gilmour’s playing was his highly melodic bending style, in particular his 1½ step and 2 step bends, with exaggerated vibrato and his propensity for unintentionally hitting open strings, yet not editing them out of his solos.
This week’s chart contains none of the bends/frills found in the riddle chart but there are a few fast grace notes to keep a look out for. Otherwise, besides the diminished chords, this chart is pretty straight ahead, enjoy. 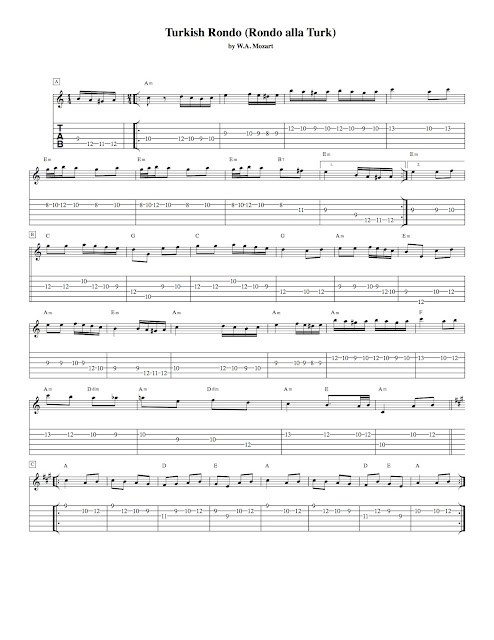 www.PersingerMusic.com
Posted by Unknown at 11:05 AM