Global Guitar (Have Guitar, Will Travel) by Shawn Persinger


I was fortunate enough last week to be invited to present my "Global Guitar (Have Guitar, Will Travel)" talk at the New Haven PechaKucha. For those of you who don't know PechaKucha is a is a presentation methodology in which speakers present 20 slides for 20 seconds each on a topic of their choice. Thus, each presenter has just 6 minutes and 40 seconds to explain their ideas before the next one takes the stage. The format keeps presentations concise and fast-paced. It's also a lot of fun.

My PechaKucha talk was a highly condensed version of a lecture I have given at several music camps, schools and performing arts centers around the country. My "Global Guitar" presentation relays the story of my 2007 World Tour during which I traveled to 14 countries, in four months, with two guitars and gave countless performances. The talk also puts an emphasis on how you can do it too! What follows is the, first half of the, abridged version I presented at PechaKucha last week (with a few extra bits thrown in). Feel free to read this in 3 minutes and 20 seconds, just look quickly at the photos my wife took or peruse at your leisure. The second half will be published next week.

In addition to the "Global Guitar" lecture format I also wrote an article for the Nov. 2007 issue of Guitar Player Magazine. This link "Global Guitaring: GP" will take you to a PDF download of that piece (note: download will start automatically). 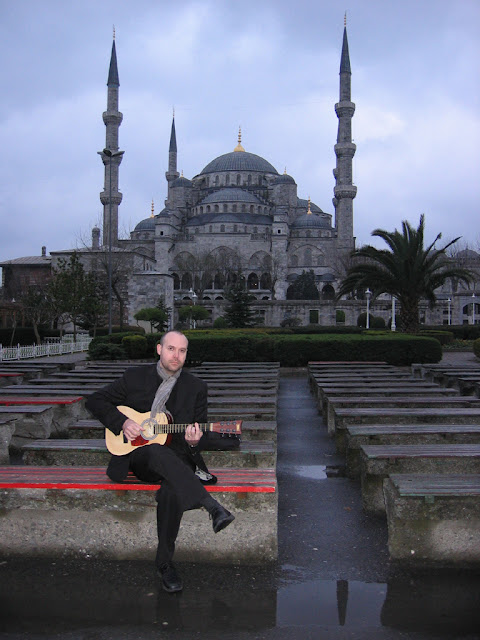 In 2007 my wife and I took a four-month, 14-country trip around the world. I played guitar and my wife took some pictures of me playing guitar. This talk is a little on what we did and how you can do it too, for less than $40 a day.

The first thing to do is to buy a one-way ticket to Istanbul, Turkey, or the destination of your choice (though I do advise a trip to Turkey). But it must be one-way, that way you’re stuck.

In preparation for the trip we also bought two tickets on the Trans-Siberian Railroad, (from Beijing to Moscow) and a couple of visas. That’s it. 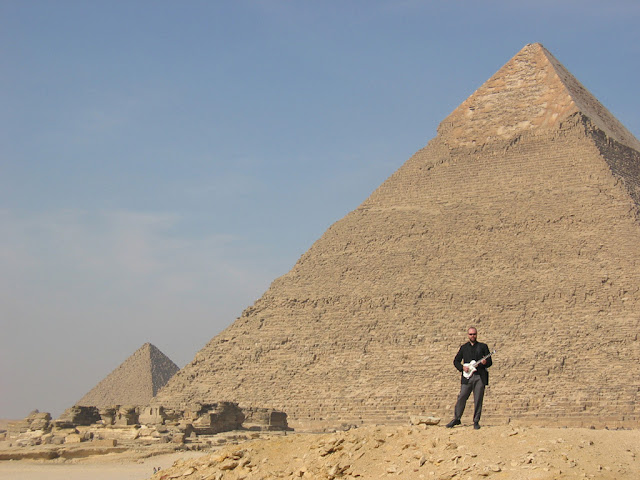 Once we got to Turkey we found it unusually expensive to fly from Istanbul to Egypt…so we went via hydrofoil to Cyprus and then flew to Cairo (that is a very funny, but also very long, story I cannot tell in under 20 seconds. You can find it here Molly's Travel Blog). We ended up flying all over Egypt, unusually inexpensive to do this and a major time saver.

Egypt is highly recommended if only for a photo like the one above that people constantly ask, "Is that photoshop?" 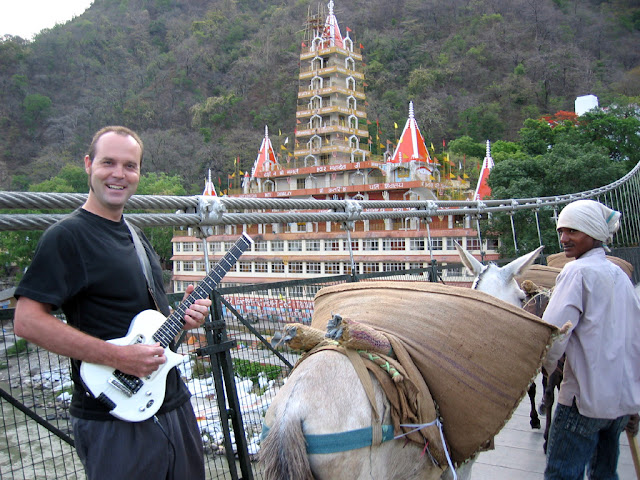 Off to India. Here in Rishikesh where The Beatles wrote many (most) of the songs on “The White Album”…in honor of this I have grown sideburns.I advocate for sideburns...if you're in India.

By now you may have noticed I have two guitars. 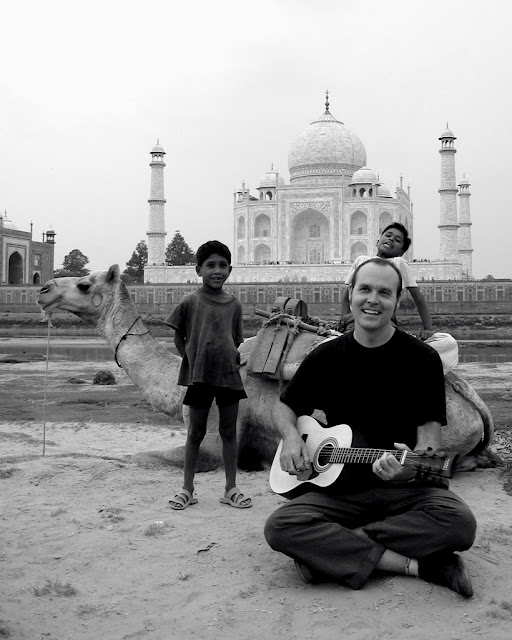 Guitar Player Magazine mislabeled these two men as “panhandlers” but they are most definitely not! They are businessmen! They charged us $5 to take photos with this camel.

My favorite photo from the trip. Do you want to know how to save money in India? Don’t pay to see the Taj Mahal twice (I had been there in 2000), just go around back. 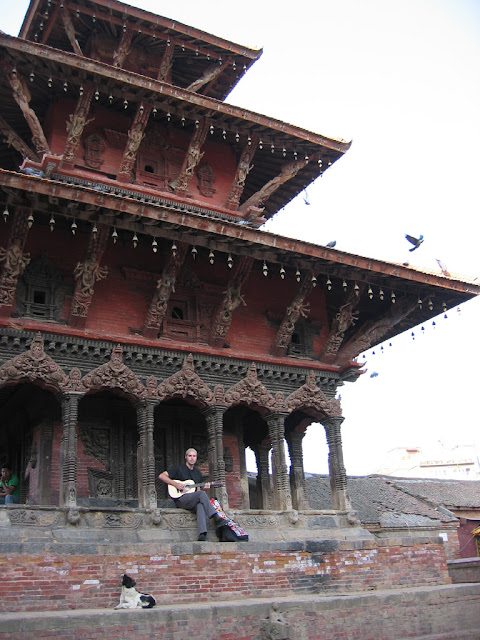 Not much to say about this photo, I just like the bird taking flight. 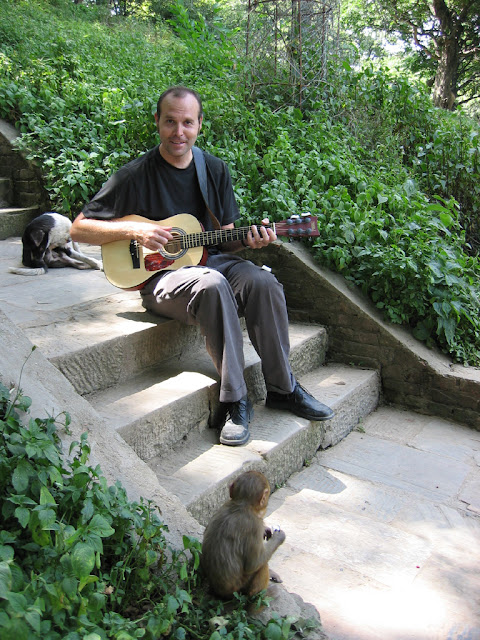 The monkey temple is an amazing place. There are literally thousands and thousands of monkeys swarming everywhere...except for the day we were there! It was too hot for monkey gallivanting, they were sleeping in the forest. Luckily a local woman was able to call out to some monkeys and a few showed up for the photo shoot.

This picture was taken just moment before a very large monkey jumped on my head to grab food out of my hand. I began “freaking out” as my wife puts it, yelling, “I'm going to get some monkey disease all because I wanted a stupid photo!” “Monkey very impatient for food and camera,” was the all too late warning from a local. Who knew monkeys were such divas.? 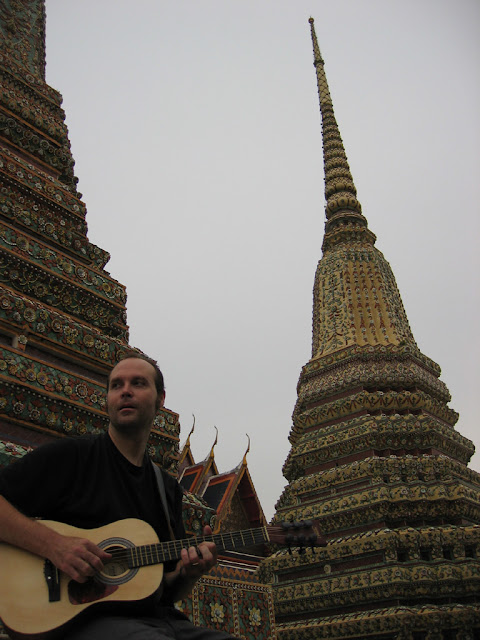 An all too brief, 36 hour, stay in Bangkok. Luckily I'd been to Thailand before. For the budget minded traveler Bangkok is the perfect destination. The city itself is inexpensive and lots of fun but it also serves as a hub to fly almost anywhere in Asia. We booked four flights using a package deal from a Thai airline, something like $180 for four flights, in three countries. 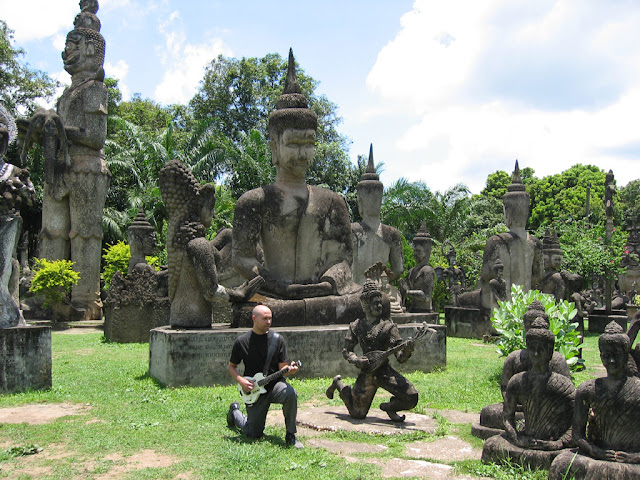 This photo has by far the longest story to it…long story short…I am unable to lift my back leg off the ground in this photo because 45 minutes earlier we had a very bad motorbike accident…which I found out just last year (four years after the accident) left me with a permanently broken collar bone.

That said, a full work up, with X-rays and painkillers from the Laos hospital only cost $8. And it wasn’t their fault the collarbone break was missed, it took an MRI to see that. 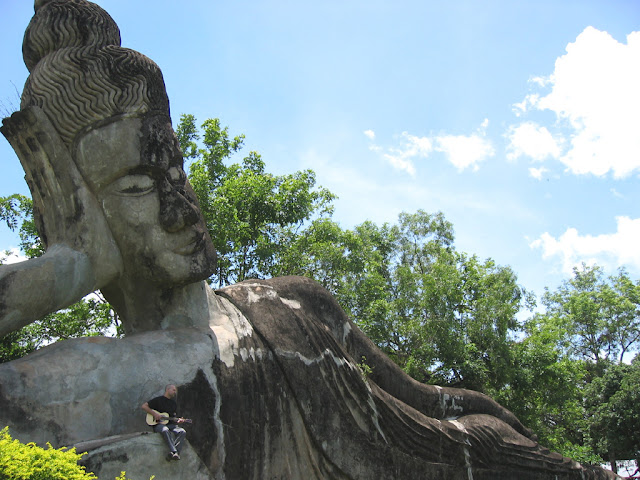 Another shot of the Buddha Park. The Buddha Park is an amazing park/garden outside of Vientiane, the capital of Laos. To read more about it on Wikipedia click the link above. 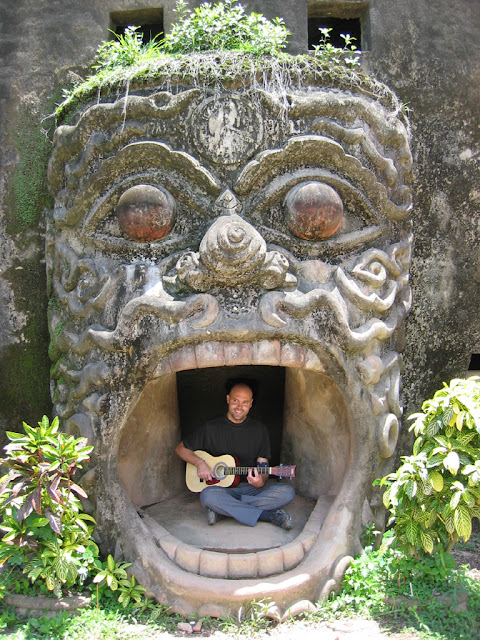 One last photo of me at Buddha Park trying to pretend I'm not in excruciating pain.

One quick note on the people of Laos. They were absolutely lovely. Besides the motorbike accident we had a joyous time in Laos. A beautiful country and a wonderful holiday, within a holiday.

Next week part two of the D.I.Y. World Tour including stops in Hong Kong, Mongolia, St. Petersburg and many, many more wonderful locales.