The Most Common Chord Progression in the World? (Part II) by Shawn Persinger

By the author of
The 50 Greatest Guitar Books

Last week’s blog was immensely popular and I received dozens of e-mails asking for more, specific, information: I wrongly assumed that most people would be familiar with the basic chords I discussed in the article, that was my fault, from now on I shall keep in mind that absolute beginners as well as seasoned players are reading.

Let’s start with the simplest of chords (which by the way if you are a beginner are not all that simple but certainly are essential). The first page of music below shows the I V vi IV progression in the keys of: G, D, C, A, E, F. Normally when teaching music theory most programs start with the key of C because it has no sharps or flats. I begin in the key of G because it is the most common key for guitar players (no pesky F chord to deal with). 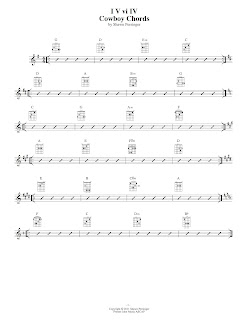 As simple as this chart might seem it actually provides a wealth of information and it will get you playing almost every song listed on last week’s chart.

This next page of music shows you the same keys and chord progression but this time using all power chords. In case you don’t know a power chord (which is a colloquial term that has found it’s way into 21st century theoretical use) is technically not a chord! Theoretically you need to have three different notes to make a chord and even if you play a three-note power chord (see example 5) two of those notes are the same note, just in different octaves. So technically a power chord is a dyad. A dyad made of the root (1) and the fifth note (5) of a major (or minor) scale; that is why power chords are also referred to as “5” chords (G5, C5, etc.) All that said power chords are now commonly (if grudgingly by some) accepted as being “real” chords. 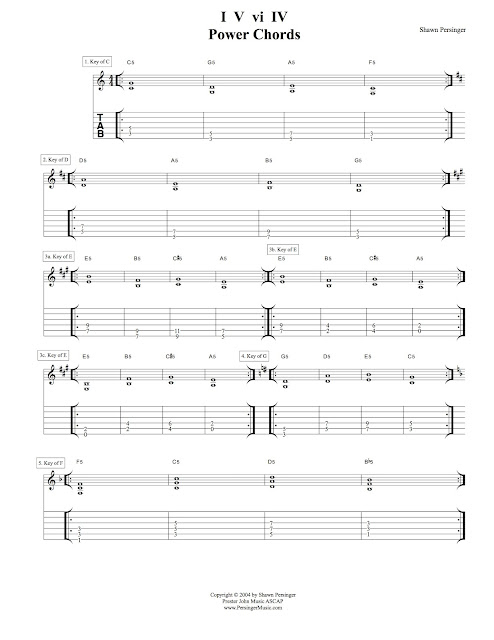 You might also be asking yourself, “How can a A5 in the key of C be an A minor chord (Ex. 1) if it only has two notes?” Once again, technically, it is not an A minor, it’s an A5. But the sound of A minor is implied by the overall tonality of the chord progression.

Finally, this last chart is the same chord progression(s) using barre chords. In addition to the traditional barre chord shape I have also included the “Hendrix” barre chord (Ex. 4), which uses the thumb to reach over the neck. I have included this shape because it comes up so frequently. Besides Hendrix (who did not invent this but certainly popularized it) you will also find this shape in the playing of John Frusciante (Red Hot Chili Peppers), Keith Richards, Stevie Ray Vaughn and many others. This shape allows you to play the bass note with your thumb while permitting you pinky to remain free to play additional notes on the high strings (think “The Wind Cries Mary” and “Little Wing”). 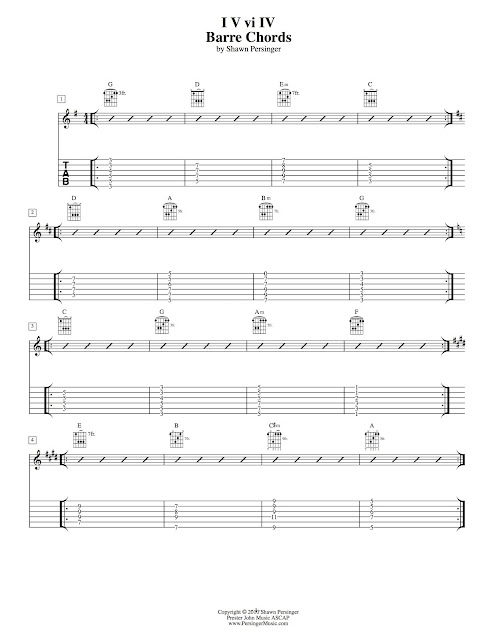 I trust these charts will answer most of the questions I received last week about the I V iv VI chord progression but if not you should feel free to e-mail me with any further inquires.