The following chart contains six of the most common licks used by the great Gypsy Jazz guitarist Django Reinhardt.  Below the chart you will a list of recorded songs in which Django used these lines along with some of the chords he plays them over. This is a very abbreviated list, so Django aficionados should feel free to send me more references. 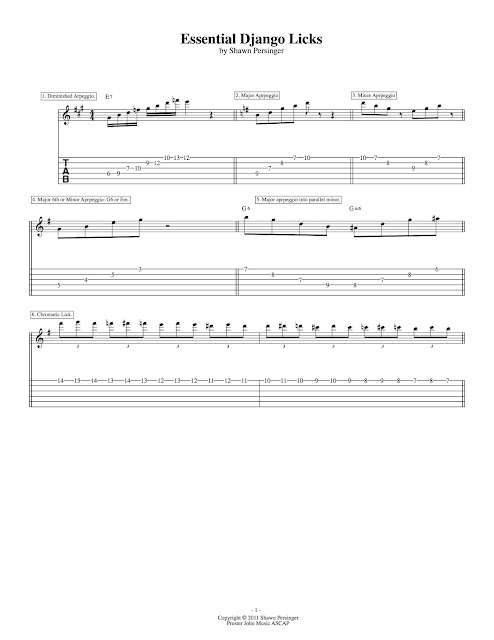 One Myth Regarding Improvisation

There is a myth regarding improvisation, especially jazz improv, in the thought that the musicians are constantly making up everything they are playing. This is not true. More often than not the players are varying, transforming and rhythmically manipulating ideas that they have practiced hundreds if not thousands of times. This makes the habit of learning and practicing licks, yours own as well as those of others, a legitimate use of your time.

Where to Hear Them

I would like to note that I am by no means a Django expert. I like...okay I love Django's music but there are many, many, many more qualified Gypsy jazz players who have devoted their entire lives to the study of Django. Below are some links I highly recommend you visit.

The End.
See you next week.
For more on Shawn Persinger is Prester John please visit:
www.PersingerMusic.com