Note: This is one of the first lesson articles I ever wrote, circa 2001. As a result, given the brevity of the text, the material is probably a little more difficult than I would attack today. That said there is a lot of useful information here and a fun excerpt from my song, "Nearer to Nothing". If any of you would like to see a full transcription of the song just drop me an e-mail.


You may also note that this piece is labeled, "Modern Primitive Guitar I". I plan on doing a series of specific blog entries on this style, outlining and demonstrating its distinguishing characteristics, e.g.: Dark yet Playful, Sophisticated yet Naive, Technically Demanding yet Sloppy, Haphazard yet Exact. 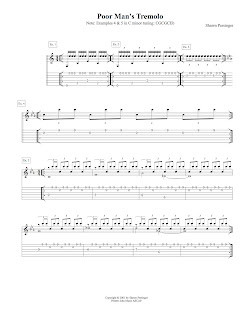 Tremolo is one of the most difficult and time-consuming guitar techniques to master. Most often associated with classical and flamenco guitar, many steel-string fingerstyle players have also incorporated this technique into their playing. I am not one of them. As much as I have practiced I have never found the discipline it requires to achieve this skill. So allow me to introduce what I call “The Poor Man’s Tremolo”. But first let’s make sure we all know what customary tremolo practice is.

Example 1 shows traditional tremolo picking. This technique can be achieved two ways. The most common picking pattern is P-A-M-I, for the hand naturally performs closing motions towards the direction of the thumb. P-I-M-A also possible but, generally, not as effective. Example 2 shows a Flamenco tremolo which adds one more note! Usually plucked P-I-A-M-I.

Now back to my Poor Man’s. Poor Man utilizes only three fingers, P-I-M or P-M-I, and two strings, example 3. Of course the effect is not the same, how could it be? You are playing one to two notes less than the standard tremolo. So what? It still sounds great, it still sounds fast and it still sounds interesting. Interesting is what I’m most drawn to, not “correct” or “traditional”.

Examples 4 & 5 come from my song, “Nearer to Nothing” (C minor tuning: C G C G C Eb) from my CD “The Art of Modern Primitive Guitar”. The first example shows the tremolo utilizing an octave note. The second example shows how to incorporate a bass line melody line while continuing the tremolo.

By the way, “Nearer to Nothing” was written specifically as a “show-off” piece. The title hints at my feelings at the time that I wrote it...I thought of it as little more than a cheap, flashy trick. But when I listen to the recording of it now I think, “Hey that guy’s pretty good.”

Download, "Nearer to Nothing", or the entire CD, from iTunes. 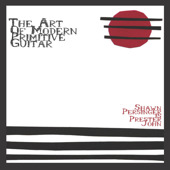 The End.
See you next week.
For more on Shawn Persinger is Prester John please visit:

Feel free to e-mail me with any questions you might have: PresterJohnMusic@gmail.com