Guitar Music is the International Language: Indian Train, May 2007 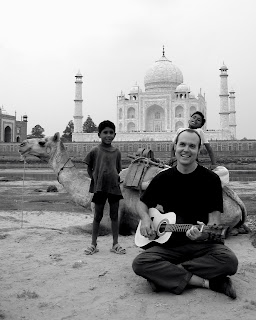 (Note: This first piece starts out, seemingly, a little angry but that is just preface...storytelling...it ends on a VERY positive note.).
Varanisi India, May 2007
“Show me your g@#*$!@n ticket!” I screamed at the diminutive Indian man, while I ripped my bed linens out of his hands, almost smacking my wife right in the mouth with my hand as I swung wildly.
It was another Indian train, the Varanasi Express, two hours late. Our cabin contained six berths, one each for me and my wife, four others for additional travelers. There were fourteen people clustered there when we arrived.
I tried to keep my cool, I’d been on Indian trains before, and I knew the routine. The train company sells two types of tickets: one with seat reservations, one without. A first come, first served, standing room only concept that works okay as long as someone with an actual seat reservation doesn’t show up.
“Don’t let them take advantage of you (the proverbial, prejudiced, ‘them’),” I said to myself. They know the rules. They just want to know if you know the rules. I had started calmly enough, removing any and all pieces of luggage occupying our rightful space, the fourteen berth usurpers would just have to find space elsewhere.
“Not possible! Not possible,” the teenage girl in a loose fitting sari was telling us in between shouts of Hindi directed at her older brother. “Not possible,” I agreed coolly tossing her luggage into the aisle with the crowd that had gathered to watch the show: marquee writ large: “Us verses Them.”
They lost.
They knew they were in the wrong but they were not going to give up without a fight or rather a test: a test of my patience, my consideration and my benevolence. A test I failed. Both sides defeated, mine at having given in to base acrimony, and them for losing their ill-gotten seats, we glared at each other. They had moved some of their group into a less crowed berth and quadrupled-up the rest of their gang onto the four remaining beds.
“Play a song,” one of the spectators of the previous ten minutes said, gesturing to my guitar case. “Yeah, play a song,” a Welsh girl we had recently met agreed. A suggestion surely given to try and relive the tension and animosity hanging in the air like…well like tension and animosity on in an Indian train. Diffidently and warily I pulled out my battered acoustic and bemused strummed a few abstract jazzy chord changes.
“Do you know any Hindu songs?” One of the Indian passengers asked hopefully.
“I’m sorry I don’t,” I replied lamely. I had learned my lesson a few weeks earlier; during an attempt to coax out some Ravi Shankar-esc melodies I was discouraged by the Bombay locals, who said with smiles on their faces, “Sounds like Spain.”
“Play a Christmas song,” the Welsh girl suggested. “They know the Western Christmas songs.” She had been living in India for six months and knew much more about the culture than I but this seemed a bit of a stretch. “Truly,” she continued, “they often sing them at work.”
Still wondering if she was putting me I gave it a go. As I strummed a mighty D7 and leapt on the G chord I sang a halfhearted, “Dashing…” and before I could finish the first line the train erupted with, “…through the snow, In a one horse open sleigh.” It would have knocked me over it I hadn’t been sitting down (and pinned between two of the original fourteen who had wormed their way back into the berth). Never had a heard Jingle Bells sung better. There were even some harmony vocals floating in from the berth next door. Smiles grew on all the faces around me; the man I’d curse just minutes earlier, my wife, who’s face I’d almost accidentally smashed after the cursing, the Welsh girl who’d been embarrassed by my ungracious, Western, behavior. As far as I could see, grins all around.
And suddenly I felt unexpectedly privileged. A cliché I had eschewed for years was being thrust upon me with an undeniable force, the platitude that “music is the universal language,” a saying that always seemed trite and apocryphal in my mind was playing out before my very ears with such ferocity that even a weathered cynic such as myself could not deny it’s authority. We had managed to transform the hostility of clashing cultures and manners into, dare I say it, a heartwarming meeting of the minds by way of a sentimental sing-along.
I followed up with a playful Rudolph, a tender Silent Night and several other traditional holiday songs while all the other singers kept pace. The fact that that it was May and the temperature was still well above ninety-degrees even though it was ten o’clock at night had done little to tarnish our feelings of yuletide glee. After what seemed like hours, but was probably no more than twenty-five minutes, I packed up my guitar and left the stage of one of my greatest gigs ever. And while departing this venue was nothing more than moving to the top bunk of the dusty, humid railcar I couldn’t help but feel like I was backstage at Madison Square Garden with the click-clack of the train sounding like fans pleading for an encore.


The End.
See you next week. For more on Shawn Persinger is Prester John please visit:
www.PersingerMusic.com
Posted by Unknown at 12:14 PM